In reality, the human body pivots around its centre of mass, the mid to lower torso. Through a series of complex mechanisms, humans have evolved the ability to maintain stability in three major areas of the body; the torso (the vestibulospinal reflex), the eyes (the vestibulo-occular reflex), and the head (the vestibulocollic reflex). The fundamental purpose of these mechanisms is to maintain equilibrium as well as visual focus on predators and prey. It’s difficult to run away from a sabre-tooth tiger or catch a shark with your bare hands if your vision is blurry and you keep falling over.

You can see these mechanisms at work in this video. Pay close attention to the head movement of the girl in the green and yellow.

Her head hardly moves for the entire race! (Side note: this is also fantastic squash and stretch reference, but that’s another article)

Let’s look at another reference video. Again, pay attention to the stillness of the head and centre of gravity on each of the athletes. Draw a mental path that the head is traveling along in space. Even in extreme direction changes, such as the guy falling on the skateboard, the head is held relatively still compared to the otherÂ extremities.

As you can see, especially in the first two clips of the football players doing cone drills, the legs and arms are being used to redirect the inertia of the centre of mass and the head is doing its best to remain as still as possible. On the sharper turns, the entire body almost appears to rotate around the head’s position in space.

As an former Animation Director was fond of telling us, the only animation principle you need to remember is “Force”. You cannot move an object in any direction without force in the opposite direction. The amount of force being applied is how weight is demonstrated. To make a sharp, 90-degree right-hand turn at a running speed, the character needs to decelerate and redirect his mass by applying force towards the front and left sides of his body. We can see this in action when we break down one of the turns in the video. 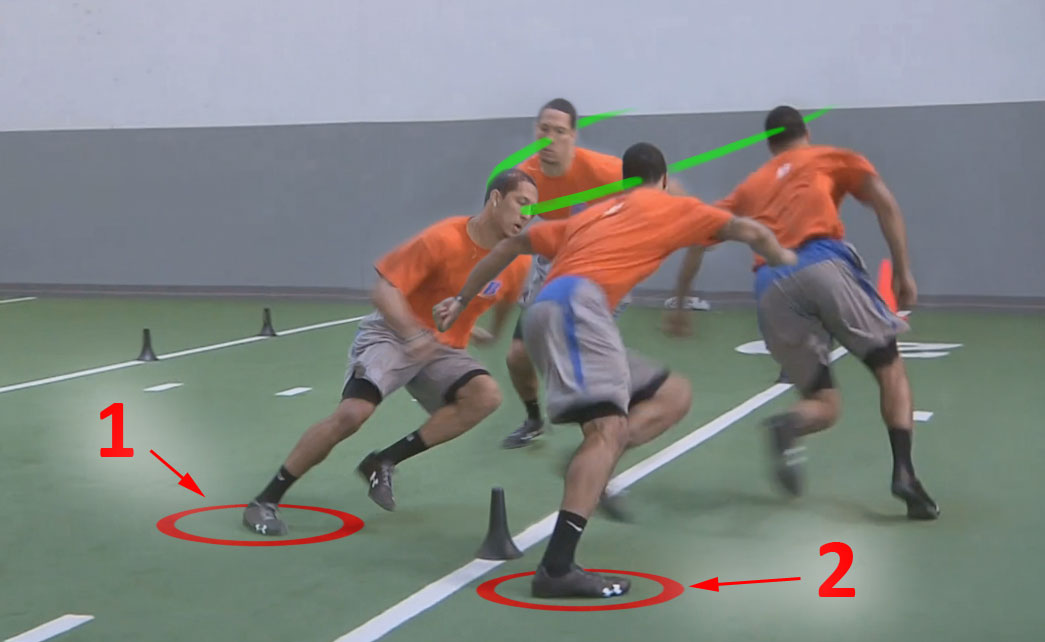 Taking this reference and knowledge, let’s review some in-game footage from a few random clips I found online.

Hopefully the issues in the head movement on screen are apparent to you now. These types of issues aren’t exclusive to games either. Often in feature films, especially ones with a mix of live action and CG, the CG character “feel” wrong to the viewer but they just can’t pinpoint the reason why. There’s a good chance that the character is exhibiting some of the issues described above.

Here are a few clips showing fluid head and core movement. Notice how even though some of the movement is almost super-human, it still remains quite believable when this principle is applied.

So, the next time you sit down to create a movement system, try to keep the above in mind. As we move towards more elaborate motion requirements on the next gen consoles, stepping back and taking stock of the fundamentals will be even more important.

Start with your higher-frequency animations. If you have some kind of metrics system built into your game, data-mining for which animations get played and seen the most should give you an excellent starting point.Â Usually this means your main characterâ€™s core locomotion. Starts, stops, and turns. Try to avoid getting caught in the common trap of spending a lot of time worrying about an area that will be seen less than 20% of the time. Focus on the 80%.

Unfortunately, there is no “magic bullet” to solve all of this currently. Head tracking, IK, animation layers, procedural systems…all need to be authored with this in mind and working together to maintain a sense of weight and force. Often the cause of these issues is multiple animations systems working against each other. Always be asking if each new component is supporting the greater goal: responsive, believable character movement

I would love to hear in the comments about how other teams have approached this and what your challenges and successes were.